Well, you should know by now how the famed ‘Monkeys jumping on the bed’ song goes. Just a couple of days into 2019, we were greeted one horrifying episode when our little monkey fell off the bed. While she didn’t quite hit her head, she did end up with a hairline fracture on her elbow.

Incident happened on a Saturday evening where we were just about to have few friends over for dinner. She was playing in her room unsupervised, mostly because we felt she’s old enough to do so. We did leave the baby monitor on and could hear what she was doing in her room which was basically watching TV and playing with her toys. I didn’t know what happened exactly but I heard her crying and the Man trying to soothe her.

Found out later that she slipped off the bed frame while trying to jump off with two pillows placed on top of the frame. This girl, she really has no fear.  Her cries were pretty loud and when we asked if she could move her arm, she screamed louder and told us she couldn’t. We were in a dilemma as to whether we should rush to the hospital to have her treated but on the back of mind, we also thought perhaps she was in shock and once she had her nerves calmed, she could move her arm.

So our friends came, we had our dinner and while the crying stopped, when we attempted to get her to move her arm, the tears would start along with the whining. We decided for peace of mind, it would be better for us to head to the hospital to get a X-ray done.

After approximately about 45 minutes wait at KKH Hospital (A&E for Children), we did a X-ray and our worst fears were confirmed. The little one did have a hair-line fracture on her elbow and that elbow needed to be in a cast. 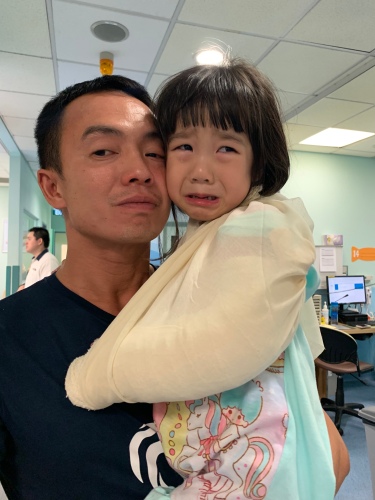 Our first thoughts were whether the cast would be comfortable for a young child and whether we should cancel our upcoming ski holiday. But the doc on duty told us to just leave the cast on for about a week before going back for another review with the specialist. And hopeful we remained. 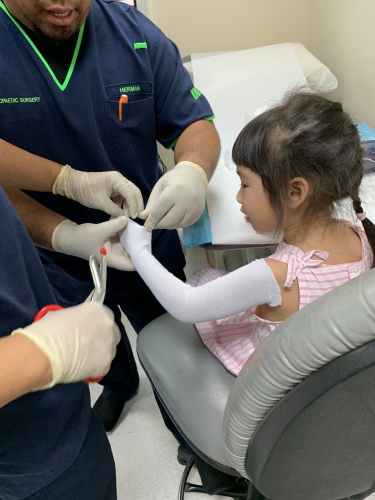 A week on, we went back to see the specialist who advised us to let the Bub be on another cast (he assured us the material used for this cast would be more comfortable than the previous one). I guess the highlight of the whole session was that she got to choose the colour for her cast. She went with apple green in the end. With the ski holiday fast approaching in Feb, I daringly asked the doc if her cast can be removed by then and for her to learn skiing. He said ‘let’s see’! While the very least he did was to book the next check-up a few days before the Lunar New Year holidays. He was hopeful that the cast will be removed by then for her to enjoy the season of feasting. 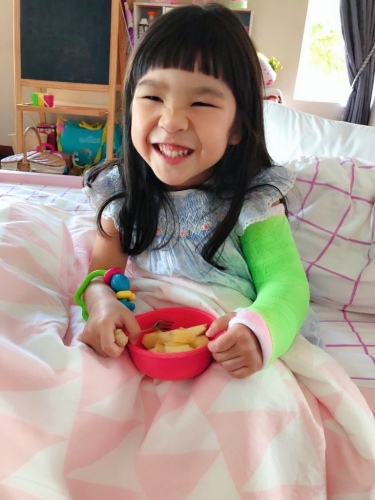 It was a traumatic experience for us as parents having to see our child being in a cast and just praying that it would not be as unbearable as it looks (ie: itchy and smelly). Thankfully, the Bub is such a trooper and her am being in the cast did give her the extra boost of confidence to run around (back to her usual normal self).

That said, the extra attention that was showered upon her during the time then didn’t hurt as well. She had extra hugs, kisses and portions of food/ fruit and ice-cream that came along her way. 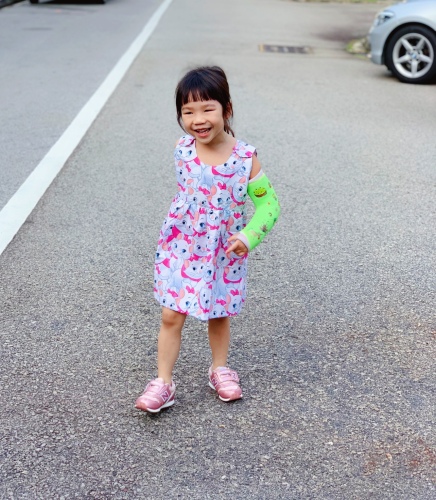 As for our holiday? We did go eventually and the Man and I took turns hitting the slopes while the Bub stayed indoors and got an extra-large dose of Netflix. Ain’t a bad way to spend a holiday right?