The bub is sick again!

We had been a little edgy the last two days as her classmate was down with the dreaded Hand-Foot-Mouth-Disease (HFMD) otherwise known as the no-meaning disease where there is no vaccine and the body doesn’t build immunity against the disease after getting it. There are many strains to HFMD and if you are down with it, you gain immunity from the strain of HFMD that you caught but that doesn’t stop you from getting it again.

This time she’s down with a fever and a throat infection (we had hoped) which was later diagnosed as HFMD.  HFMD brings a lot of discomfort to the child and worse, adults are not spared and adults get it a lot worse. So, every time we get an email from the school with the subject : HFMD, I pray that it’s not anyone from her class who caught it.

So when the helper sent a text to say that the Bub was running a fever of 38 degrees on Friday, my heart sank a little and had hoped that she wouldn’t catch the dreaded HFMD. I guess to put my panicky thoughts to ease, I sent her to our paed just to have it checked out. Turned out she was running a mild fever and perhaps a throat infection (which she’s prone to getting). He did tell us that we should still watch out for spots in her mouth, hands and feet and continue to monitor her temperature. Two days later, we saw spots in her mouth and she complained that her throat was painful. 😦 We sent her to the doctor over the weekend and confirmed that she was down with HFMD. I only hope that she won’t get it that bad.

Falling sick is part and parcel of growing up but every time she falls sick, the Man and I as parents always feel helpless and wished that her falling sick wouldn’t be that often. We have now amassed a long list of the temperatures that she ran whenever she’s down with a fever. The Man said to me on Friday night as we sponged her together while she was asleep “I wonder when she grows up next time, will she laugh at us for keeping a record of all of her fevers? I wonder how often we fell sick when we were young and how our parents dealt with it?” I guess our parents just dealt with it the same way as we are dealing with the Bub’s condition – with meds, rest and loads of tender loving care. 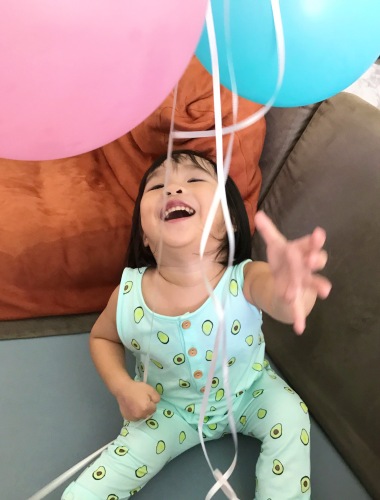 For now, the Bub is still very active. She’s been confined indoors a good part of the weekend and so far, we’ve finished two Disney movies – Beauty and the Beast plus Aladdin, she ate up all the fishball and minced pork porridge that I made for her and played dress-up with her new Princess Belle costume.

And how are we dealing with HFMD at home? She’s got her arsenal of meds from the doctor. For us, we are just sanitising our hands with Safe Hands and keeping the home clean with our sanitising kit from Our Lifestyle Shop.

One thought on “The dreaded Hand-Foot-Mouth-Disease”