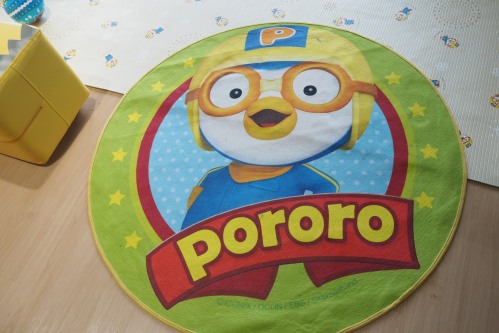 When Pororo Park first opened its doors in Singapore late last year, we had friends talking about it and visiting the place. We were quite keen to check it out but wasn’t quite sure as indoor playgrounds and gyms aren’t quite the thing that we do. I’m a little finicky about germs as I once brought the Bub to an indoor playground and she fell sick, plus I wasn’t quite sure if I had the energy to run after an energiser bunny also known as my nearly 2 toddler. So we parked the idea of bringing her to Pororo Park till she’s a little older to even understand who Pororo is.

I was rather surprised when we flicked the channels on the television one day and Bubba went ‘PORORO!’ This ‘phenomenon’ happened again when I was checking out the kids programmes on a Singapore Airlines flight to Tokyo and she insisted on watching with Pororo. That’s a sign I guess, that she’s ready to take on a theme park if she could recognise the main cartoon character.

So we were rather thrilled to be one of the bloggers to be invited to visit Pororo Park Singapore last weekend.It made for a lovely Sunday afternoon with the Bub’s fave name twin and we also spotted several familiar faces including Mama bloggers and little kiddies. When I told Bubba that we were going to go to Pororo Park with Aunty Berry, Uncle Berry (her nicks for Aunty Libby and Uncle K from The Little Bow Family) and Sophie Rose, she was so excited and kept repeating ‘Pororo Park? With Sophie-Rose?‘ the night before. I think she almost could not sleep for it took me over an hour to try to get her to go to bed! 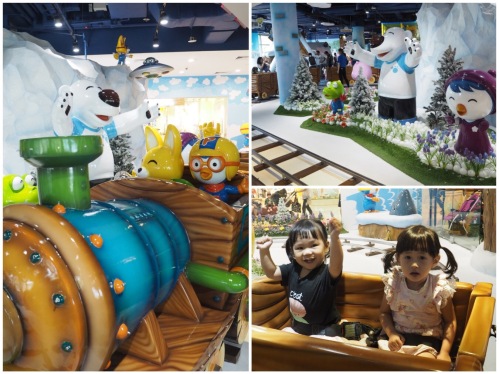 The folks at Pororo Park did plan a very thorough programme for the little ones as well as the adults. We were there for nearly three hours and throughout our time, we rarely felt bored for there were different things that we could do with the kids to keep them occupied. This is the first Pororo-themed edutainment program and playland in Southeast Asia and the theme park occupies a huge 11,000 square feet of indoor space at Marina Square. We’ve passed by Pororo Park several times when we head to Marina Square for either shopping or our meals and Bubba was always curious about the ‘choo-choo’ train that she could see from the outside. When we entered the park, she didn’t know where to go for there were too many things for her to do on sight. Since the queue for the Pororo Express was rather short, we decided to bring the gals there to go on the train ride.

The girls loved the ride so much that they kept asking for more. Thankfully, there were not too many people then so the both of them managed to go round the track for another two more times before we had to drag them out of their seats rather reluctantly.

I like to think of Poby’s Play Gym as a baby obstacle play-gym designed to tire those energiser bunnies (plus their ageing parents). The Bub wasted no time climbing and knocking those hanging mobiles to get through to the next hole. I was just glad that the Man came along with me for I wouldn’t be able to keep up with her and let’s not forget, this dare-devil also nearly stopped this poor Mummy’s heart by going down this steep slide on her own. I wished I could take better pictures but as you can see, she was moving too quickly for this noob Mama photog to snap those pics but I was suitably impressed how vibrant the colours of the gym were to attract the kiddos and how clean the area was.

We also caught the Pororo and Friends Musical at Tong Tong’s Little Theatre. The two Sophies were shaking their little tushies and danced to the beat. We were among the last few to enter the theatre so we sat right in front of the ‘stage’. As this was the Bub’s first ‘live’ musical, I was kinda worried that she would cross the line and run up to hug Pororo the moment she laid eyes on the characters. But thankfully she didn’t.

Blogger perk! Taking a photo with the main characters – Pororo (the penguin), Eddy (the fox) and Loopy (the beaver). It’s nearly impossible to get Bubba to look at the camera for a decent family picture! Oh wells.. 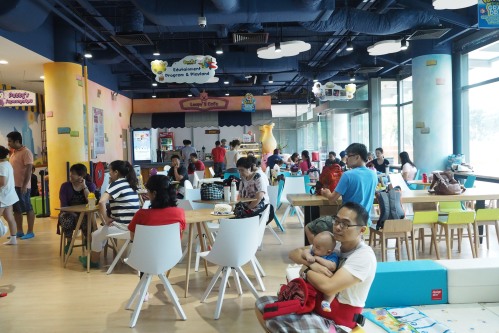 We fuelled the kiddos up with some food prepped by the folks at Pororo Park over at Loopy’s Cafe as it was quite close to lunch. The cafe whips up kid friendly meals such as banana pancakes and sausages plated on cute Pororo plates with cutlery to entice the kids. As for the adults, I didn’t get to check out the menu offering but according to Libby, they do have a decent K-food selection of Ddeokbokki and Japchae plus coffee. Trust me, you will definitely need the additional boost of energy to run after the kids. 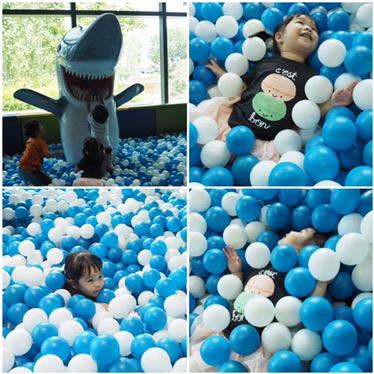 I thought that Pororo Park is great for young toddlers like Bubba. She had a whale of a time rolling around the ball pit and when she saw the slightly older kids throw the balls into the shark’s mouth, she scooted off to do the same. The Poby Play Gym was an area she spent most of her time at along with the train rides on the Pororo Express.

When we felt our energy levels waning, we were thankful that there was an interactive activity – Under the Sea – which we could plonk the Bub with other young ones as we just sat back for a bit and watched Bub sing Twinkle Twinkle and other famed nursery rhymes with her friends.

Halfway during the activity, I think she felt kinda tired so in the end, she decided rolling on the ground was far more fun then picking up the paper marine creatures. That was when we decided it’s time for us to head home as it was way pass this little girl’s afternoon nap-time.

Nearly impossible to have a proper shot of the girls as they were too eager to run around and play. Needless to say, we had a fab time at Pororo Park and look forward to our next visit there! Thanks for the invite again!

Note: An invitation to this event was kindly extended by Pororo Park Singapore. No monetary compensation was received. All opinions expressed are purely of my own.