When S from Scwingen in Switzerland invited me along for  the carnival ‘Basler-Fascnacht‘ (listed as one of the top fifty local festivities in Europe) happening in Basel, I knew I couldn’t give it a miss for this would be a fitting way to end my Swiss adventures literally with a big bang! 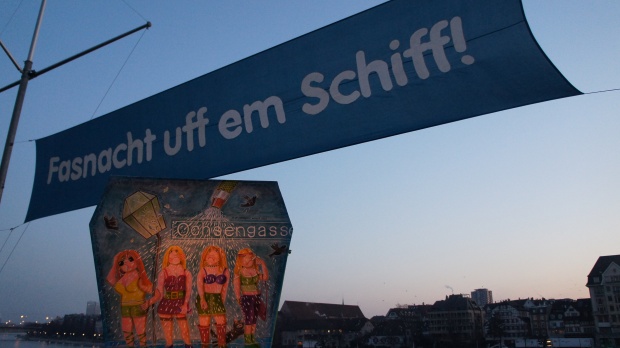 The Carnival of Basel (German: Basler Fasnacht) is the biggest carnival in Switzerland and takes place annually on the Monday, after Ash Wednesday in Basel.  It starts precisely at 4:00 am with an elaborate ceremony called Morgestraich and the carnival lasts for exactly 72 hours and, therefore, ends on Thursday morning at 4:00 am. 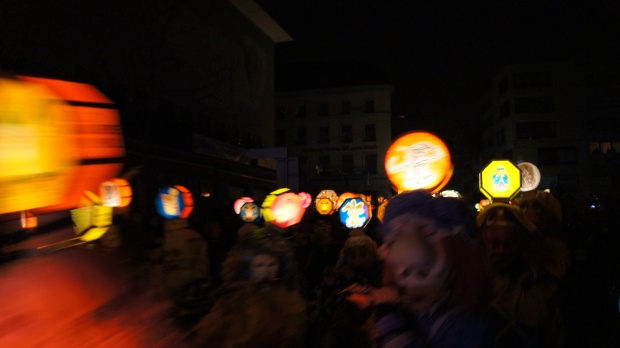 We were up all night catching the overnight train from Geneva to Basel.  We arrived into Basel at about 3.20am all blurry-eyed, but felt an adrenaline rush because the crowds were all in high spirits, and after finding a nice spot along the crowded streets, we were all ready to dwell in the festivities.

At exactly 4am, all the lights in the old town of Basel are turned off and the Morgestraich marks the beginning of the Carnival.  With the command “Morgestraich, vorwärts marsch!” (“Morgestraich, forward march!”) from the drum majors, all cliques begin to march and play their instruments.

Approximately 18,000 revelers participate in this grand carnival by wearing a costume with a mask.

Masks of clowns, cartoon characters, animals and public figures (politicians and other celebrities) are modeled.  I think some of the most striking masks I’ve seen are that of the pipers and drummers-cliques for it’s equipped with a head lantern.

The cliques play their way through the downtown by marching with their flutes (piccolos) and their drums.

A clique usually consists of a large Zugslaterne (parade lanterns) that are wheel-mounted or carried by 2 to 3 people in front of the clique followed by participants wearing the head-mounted Kopflaterne (head lanterns), pipers and drummers.

The cliques often follow no particular route when they march.  It is said that they often take the path that’s always ahead of them so it’s not unusual to find a path that crosses several cliques. If that’s the case, the clique simply waits until the other has passed.  Be sure to steer clear in the way of a clique as a spectator else you will be pushed away.  Happened to me and S as we got trigger-happy taking photos of the clique.

Also from 4 am on Monday, many restaurants and bars in the old town open their doors and remain open for the following 72 hours. 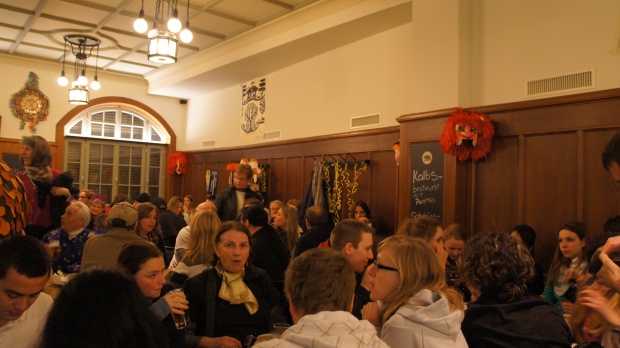 After watching the parade for about an hour, we decided to head to the famed Brauner Mutz beer-hall to sample some of the traditional Basler carnival specialties such as flour soup and Käsewähe (a quiche-like baked dish). There, we had to share our table with a group of guys who couldn’t help making fun of us when we whipped out our cameras to take pictures of the food.  S had to explain to them that we are doing this for our blogs.  Not sure if they understood but loads of laughter were shared amongst the group. 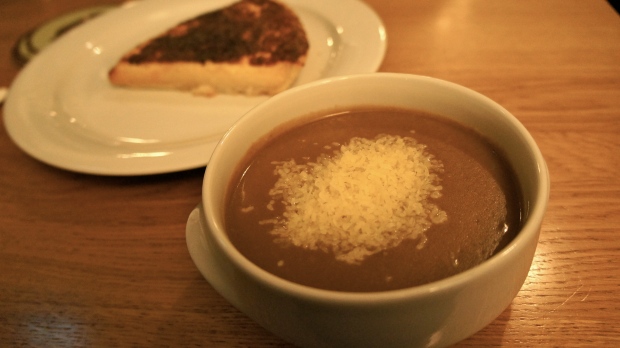 After the break, we continued to dwell in the merry-making by the marching cliques and explored the old town further while waiting for dawn to break.

As the kids marched on, one of them cheekily whipped out a peace sign as I snapped the picture. 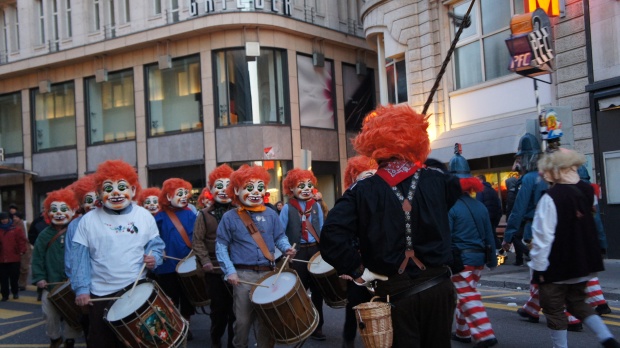 The character ‘Chucky’ immediately came to mind when I saw this clique marched passed me.  Definitely sent chills down my spine!  Brrr….

I couldn’t pass this photo-op with this reveler from the carnival.  I mean, check out his costume!  Fun and naughty all rolled into one.

Thanks S once again for the wonderful gift and inviting me to join you at this amazing carnival!

5 thoughts on “Basler-Fasnacht 2012 : A Swiss Carnival that starts in the dark”