Give me a dessert with lime/ lemon or anything zesty and citrusy, and I’m in sugar haven!  Of course, I love the occasional chocolate sweets but what really gets me going are the lemony types.

When we were in the States last year, I went sugar over-load savoring those key-lime pies for our desserts.  So this time round, I decided to try my hand at making some of these refreshing key lime tarts to satisfy those zesty-sugar cravings of mine.

Found a pretty simple recipe that a noob like me could follow closely for now, best part?  It doesn’t require any form of baking!  All I needed to get mini tart crusts that I got off the shelves from the supermarket.  The Man and I tried making the lime curd last week but followed the instructions wrongly, so I decided to re-do the whole batch of lime curd again.  And after slogging in the test kitchen for about 1.5hours, I popped these babies into the fridge to be chilled.  I’m pretty happy at how it turned out- both visually and in the taste department. 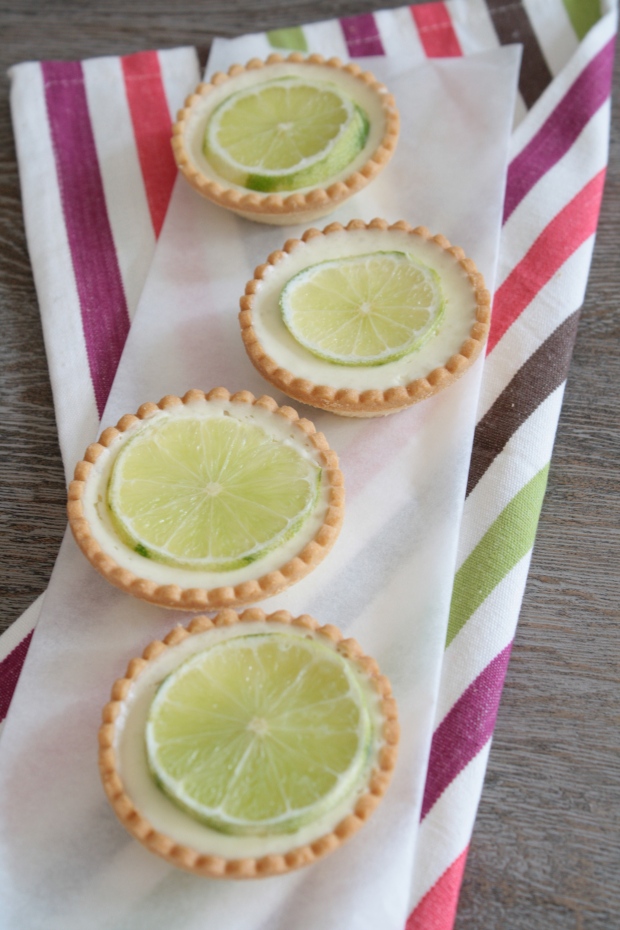 For the lime curd

For the key lime filling of the tarts

These tarts were simply refreshing and what I really needed to kick-start the week.  I couldn’t stop stuffing my face with them for it’s light and easy to eat!

OOH and update!  Probably inspired by these awesome food-bloggers – R from The Pleasure Monger and Sherie from Maameemoo – I’ve been playing around with my camera and attempting to take better stylised pictures with the food that I’ve been cooking.   Frustrated with a couple of failed submissions to Foodgawker and TasteSpotting, I decided to ‘suck’ in it and try harder at improving my styling skills and fooling around with the SLR that I loaned from the Man.  Also, thanks to the tips from R and online research, I’m finally happy with the shots that I took of the tarts.  Must have taken like 50 shots!  So, I submitted them to Foodgawker. It’s finally been accepted and published!!!!  It’s picture #10862! It’s also been featured on Tastelogie and Photograzing.  😉

So… at first you don’t succeed, you just keep on trying!

21 thoughts on “My attempt at key lime tarts”